The owner of the ranch gave me the name of a natural horsemanship trainer named Leslie to help me train the mustangs.  I immediately gave her a call.   In the meantime, Christinna and I were always at the barn visiting them.  It was only about 5 minutes away for Christinna and about 13 minutes away for me.
We were able to start leading Dude around on his halter.   We kept it on because we weren’t sure we would be able to get it back on if we took it off.  We also set up a barricade that we could use when we wanted to let the mustangs out in the arena for some exercise.   We would lead Dude in first and then herd Zeke through the barricade into the arena.  We would use Dude to help get Zeke back in to his stall.  It became a fun activity for us.  Word quickly got out in the church about the horses and I began to get people visiting them.  They all wanted to see the wild mustangs.   I met with Leslie and we worked out a schedule for her to come and help us.    In the beginning she showed us some exercises to do with Dude, using a whip with a bag on the end, to help with some ground training.  Zeke, was still unapproachable.  She suggested that we start feeding him ourselves and stay in his stall while he goes after the food to get him used to us being there.  So, Christinna and I split the feeding responsibility.  She took the morning shift and I took the afternoon shift.  This went on for quite a while.  He would start playing a game with us where we would put some food into a rubber feeder close to us and he would pull it close to him.  We would reach out to touch him but his reflexes were so fast, that we would never make contact.  Frustrating.  He also had this dreadlock on his mane that we couldn’t wait to cut off.
We spent much time working with Leslie and the mustangs.  My husband loves telling a story about when we started to work with Zeke using a bamboo pole.  We began to scratch his behind with it.  Then eventually we led our arms up the pole and replaced the pole with our hands.  We began to scratch him on the back and toward his tail.  We spent a lot of days doing this.  Zeke enjoyed it so much that he began to turn his butt to us as soon as we approached his stall so we would come in and scratch his butt.  We even got to the point of hugging his butt.  Slowly, we would creep up the side of him continuing to massage him.  Christinna was finally able to cut off that dreadlock.  Not saying she never got kicked, because she did.  She was much more brave than I was.  I really got frustrated with the butt massage.  I wanted to be able to touch his head.  We continued to work with Leslie and finally, with the help of Babs, we were able to get a halter on Zeke.    This was 3 months after we got him.  The ground work training continued now with both Dude and Zeke.   The two of them were such opposites.  Dude was extremely pushy and Zeke was extremely scared and cautious.  Dude would pull us around like a bad dog.  We really had to learn to become super aggressive with him.  Zeke, was very sensitive and would practically tip toe wherever he went with us.  He did start to really enjoy the human contact though.  We would “ground tie” them and groom them and give them spa day almost every day.  It was much harder to get Dude to stand still though.  We never really tied them up.  We also needed to get them gelded since they were approaching 18 months old.    We called a vet to come out and we were told we needed to spray where there testicles were with a hose to break open the seal to allow it to drain every day.  Wow!!  We were hoping this wouldn’t set them back because we just were able to have contact with them.  Good thing we had developed a trusting relationship so this procedure did not set them back.
Pictures of Dude and Zeke in their early training days: 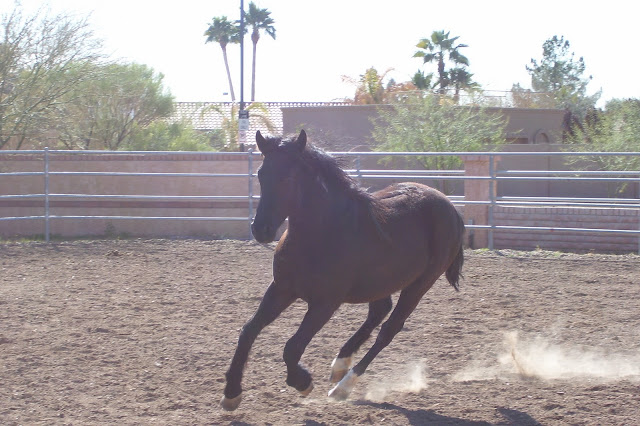 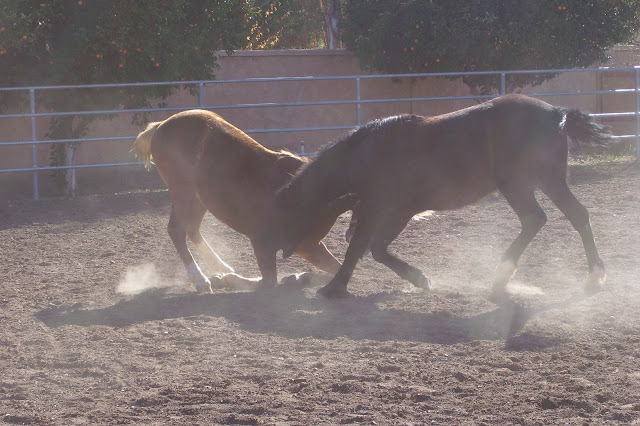 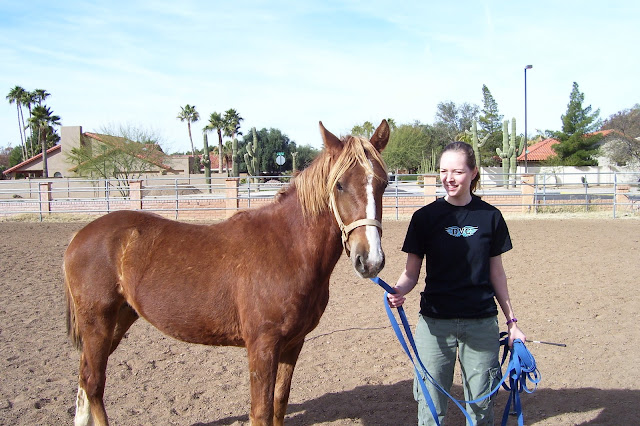 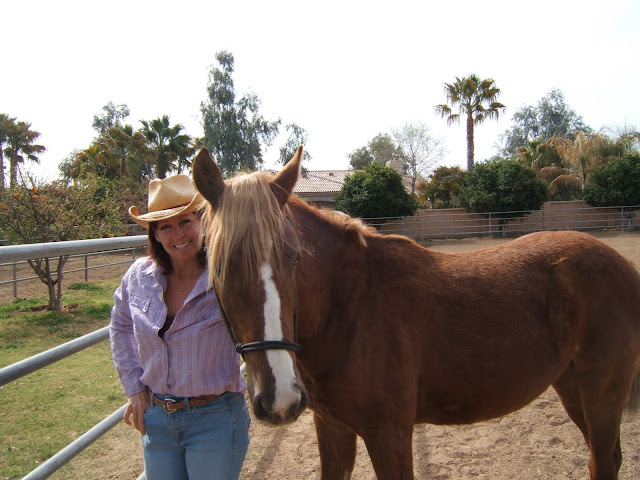 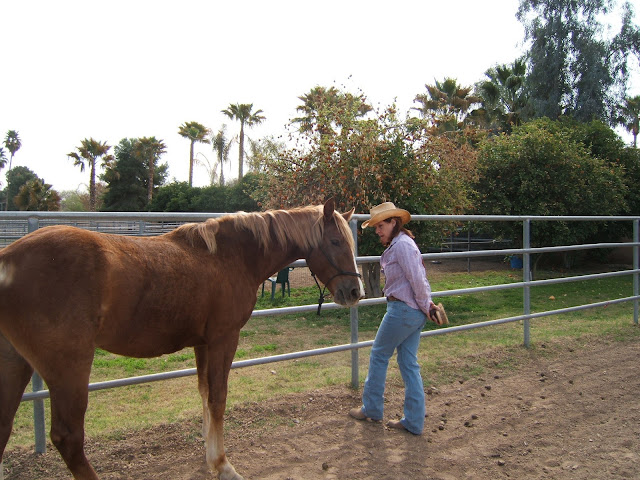 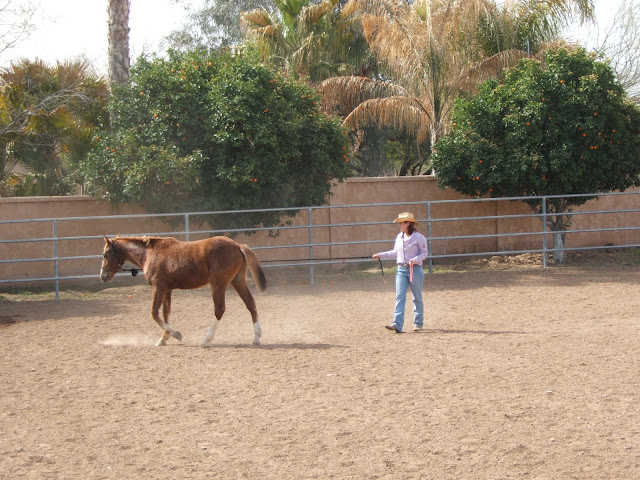 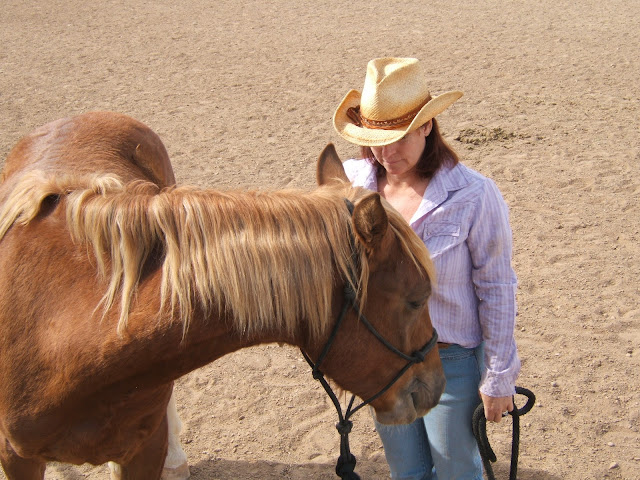 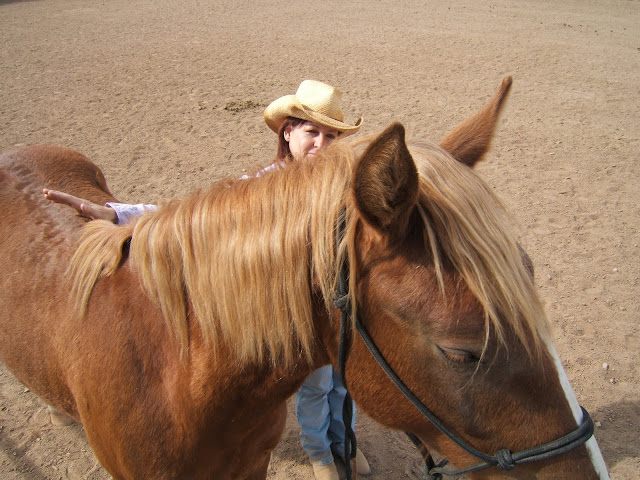 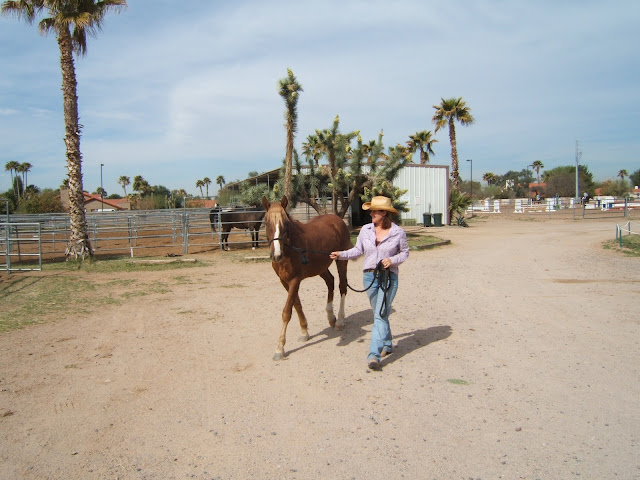 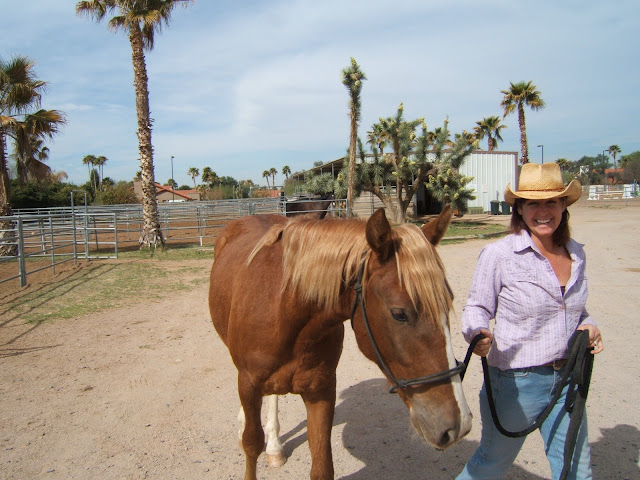 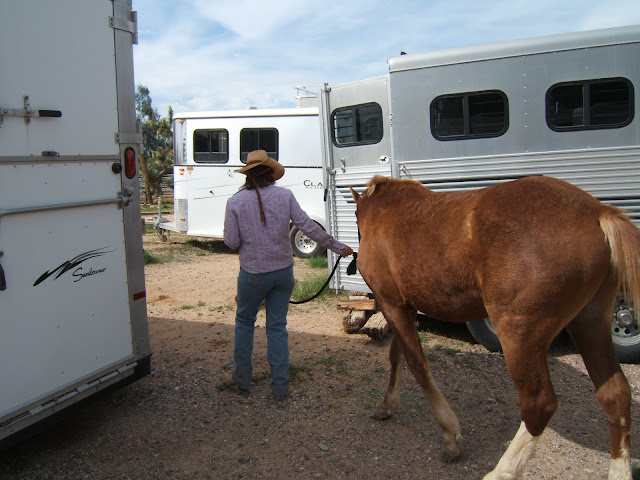 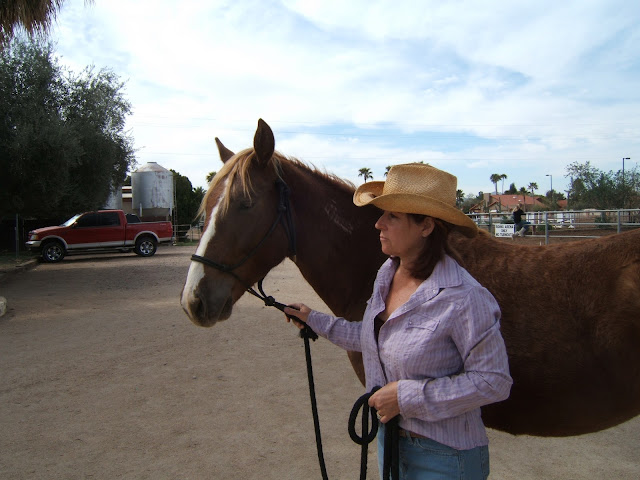 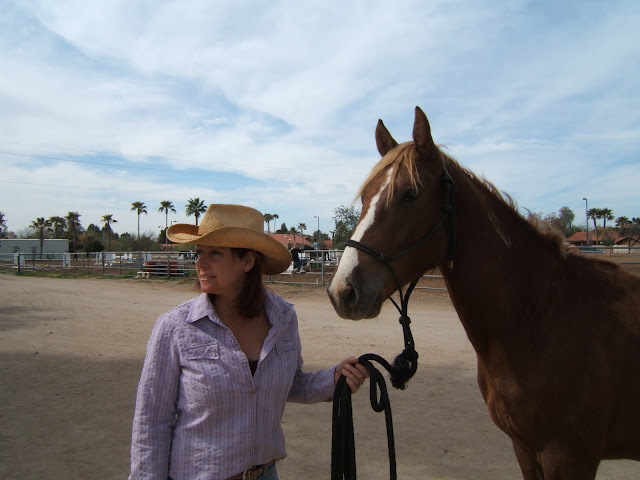 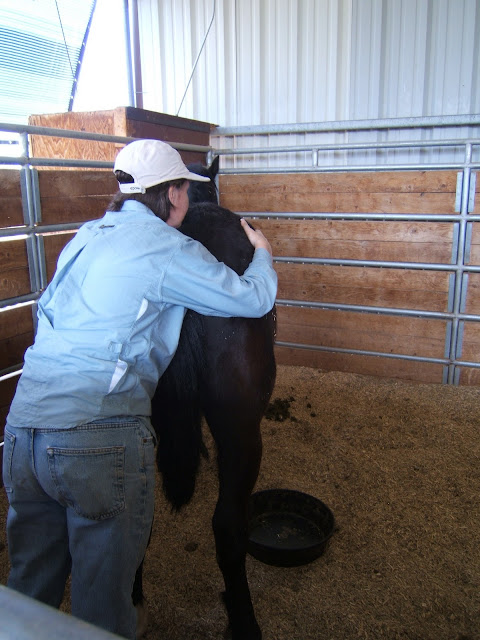 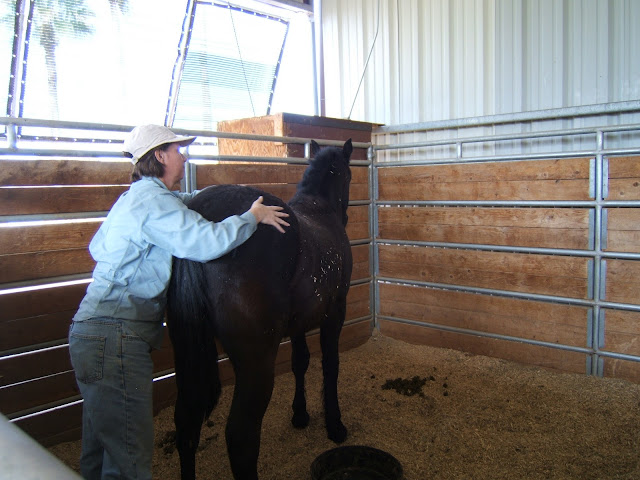 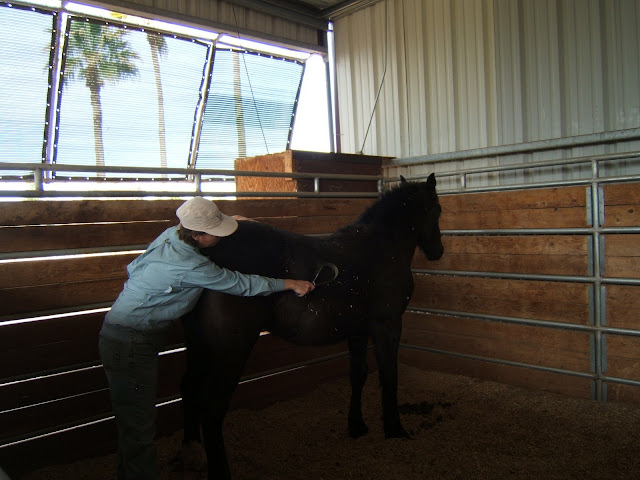 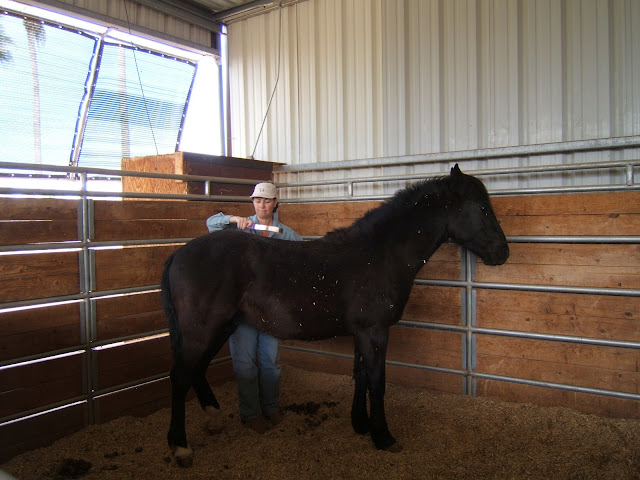 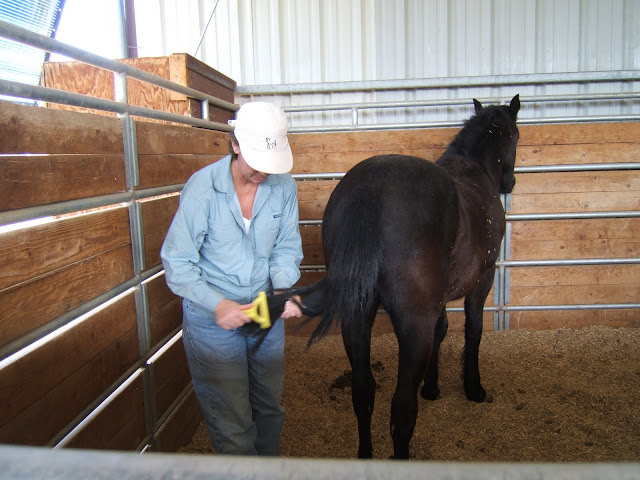 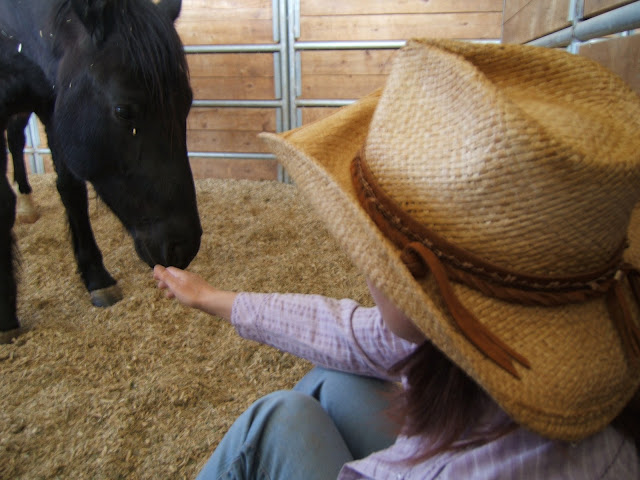 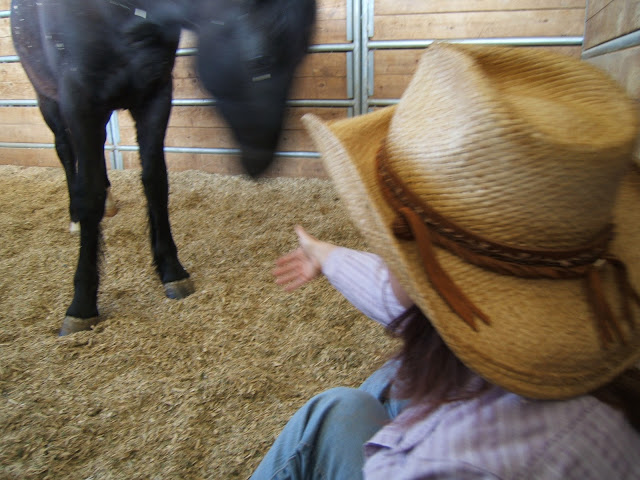 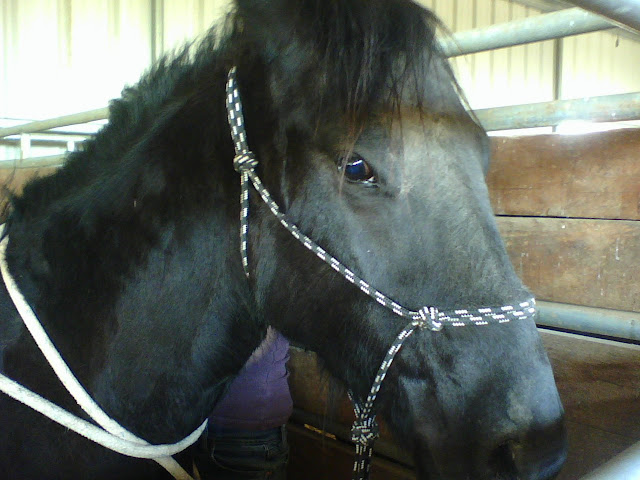