Chapter Six - Back to the Drawing Board

Dude was surely not ready to ride.   So, after about 9 months of working with Leslie, Christinna talked to me about getting someone else with a different approach to train the mustangs.  We were getting quite anxious for this part of the training to be done with.  We knew that by now they should have been at least riding with a bit.   So I decided to hire the on-site trainer, Randy.  I paid him for boarding and training.  This was in November of 2007.   He told us that when we moved the Mustangs over to him, we would no longer be able to work with them.  The only thing we could do was go into their stalls and groom them.  They also would have to be separated from each other.  The stalls, to us, were like prisons.  They only had one area to look out.  They cried for each other almost every day for like a week.  It was heart breaking.
Every time I would go by there to visit, I would never see them working with them.  I would check on the schedule and they had maybe every other day for an hour set aside for them.  Some weeks they would take off because of shows or the weather was either too wet or cold to work with them.  This went on for about 2 months.   Sometimes, Christinna and I would sneak them out of their stalls and put them in the arena to run around when the owners of the ranch weren’t there.  We loved to watch them run and play.  Also included in the board/training were horseback riding lessons per horse.  So, Christinna and I took lessons with Randy using their horses.   Finally, we were able to get on the back of a horse.    I believe he was a horrible teacher.  He did not teach us how to sit properly and he kept yelling at Christinna because she was in the wrong lead.  The horse I was on was very difficult to get to lope.  One time when working on that I whipped him in the butt which caused him to crow hop and since I wasn’t sitting properly I launched forward and was hanging on by the neck while he was going pretty fast and I fell off.  That was the 2nd time I fell off!!   Of course, I got back on since I knew that I needed to get back up like the saying says to “get back up on the horse after you fall off”.  That was pretty much the end of the lessons, because one week that they were out of town, I felt so sorry for Dude and Zeke being stuck in their stalls that I decided to take them on a walk.    Dude was so excited to get out of the stall, that he was bucking and rearing on the end of the lead line.   It was quite a challenge just to take him for a walk around the arena.  Then I got Zeke out, who normally is pretty shy.  He wasn’t as bad, but you could tell he was super antsy.
During all this time I had only seen Randy get up on Dude maybe twice in the arena and Zeke maybe once in the round pen.  Zeke just wanted to buck every time he got the saddle put on let alone anyone on his back.
So, back to the drawing board.   I then called Leslie back up to see if she wanted to work with them again.  She said that the only way she could is if I moved them up to Rio Verde to a ranch that she was working at full time.   Christinna and I went up to look at the ranch and thought it would be a great place.  Even though it would be a much longer commute, the board was half the price.    Also during this time, my mom donated her truck to the ministry.  I was officially a horse woman with a pick up truck.  My father had passed away from chemotherapy poisoning in August of 2006.   My mom needed a car more fitting for her needs.
Christinna and I worked on “trailer class” for about a week, using Leslie’s trailer, to teach the mustangs how to trailer.  We would drive around the ranch, while one of us stood on the wheel rim, “comforting” the mustangs with carrots through the window while driving them around in the trailer.   It was soon time to transport them.  Christinna couldn’t help, so I recruited Debbie to help me.  She showed quite an interest in helping with the mustangs as well.  She grew up on a cattle ranch, so she was familiar with hauling livestock.  It was pretty scary hauling them up to the new ranch in Rio Verde, not to mention the hour it took to get them in the trailer.
We really liked there new “view” stalls, plus we had Leslie right there on the property to work with them more often.
Here’s a couple pictures of Leslie with Zeke: 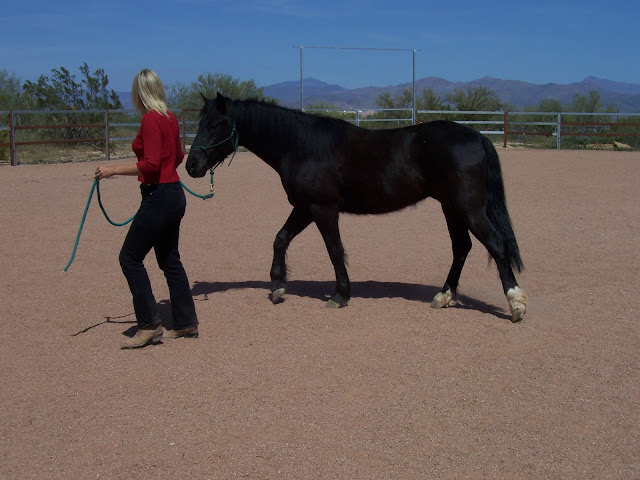 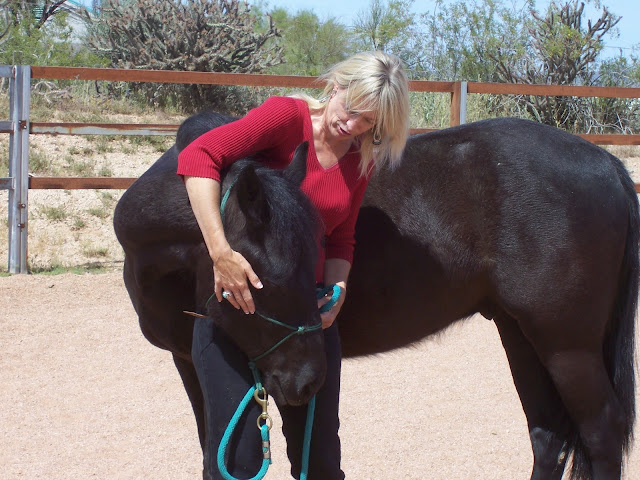