OK, so now I had two wild mustangs.  They needed to be placed in a shoot on the way into the stock trailer so they could put the halter and lead rope on them on their way in the stock trailer.  Dude got his on without too much of a fight, but it was more difficult to put Zeke’s on.  This was the first time that I saw how scared they were of humans.    The facility that I was bringing them wanted them to go into their round pen.  This was in January of 2007.   The mustang colts, Dude and Zeke, were just over one year old.   The owners of the facility did not want to put them in the barn with the other expensive horses until they received immunizations.  Especially the immunization for Coggins.  Also, they needed to be wormed.  Christinna and I visited them in that round pen for 30 days.  Each time we came we wanted to try to get them use to us.  So we would go in and give them treats.  Dude was very curious about the treats.  He learned right away that we brought things that tasted really good.  One time he almost mauled me to get to more treats.  I quickly realized that boundaries were very important or else you could get hurt.  During those 30 days it rained a lot and was extremely cold.   Zeke’s halter was not on very tight since he gave them such a hard time putting it on.  So during that cold winter month, his halter fell off.  Zeke was not eager to learn about the treats from us at all.  He always stood behind Dude, watching us.  Even though we were able to feed Dude the treats, we were never able to touch him.   Now, I was paying for the owner’s of the facility to “train” them, but they didn’t show much interest in getting the job done.  They were either too busy with their other horses, or they didn’t want to bring their horses close to them because of the risk of infecting their horses.   During the time they were there, I only saw them attempt to work with them maybe ½ dozen times.   One of the times, they showed us some things to do with them which we immediately implemented which was having them run around the round pen with us in the middle with a whip in hopes that they would turn and face us as a sign of submission and then come to us.  Because there were two of them, it was very distracting for them.  Dude was so busy protecting Zeke that he didn’t pay much attention to us.  If there were just one of them, we would have been able to progress faster, but because there were two of them, it was much harder.  This round pen had solid walls.  The only outside they could see was through the little cracks between the panels.  I started to feel very sorry for them.  I knew I had to make a change.  The owner’s of the facility did not seem happy to have them there.  The wife, Amy, really did not like Zeke.  In fact, she didn’t trust him.
Meanwhile, Christinna and I talked about this becoming a ministry for kids using horses.  I believe I was so quick to go this direction, because I was in the Word and praying in tongues a lot.  I believe the Holy Spirit was guiding me in this direction.    It could also then be a write off on my husbands and my taxes.  My son helped come up with the name of Rein of Faith Ministries.  I reserved the name through the Corporations Commission in February of 2007.   The name was reserved until June of 2007.
Pictures of Dude and Zeke in the round pen: 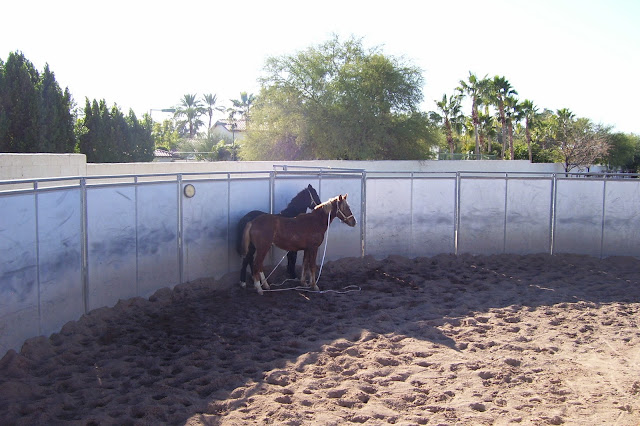 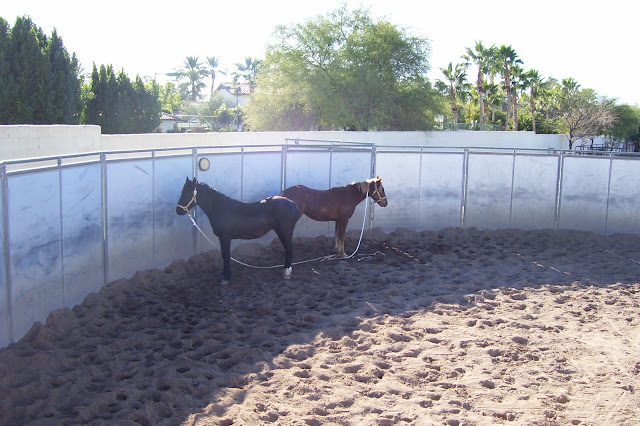 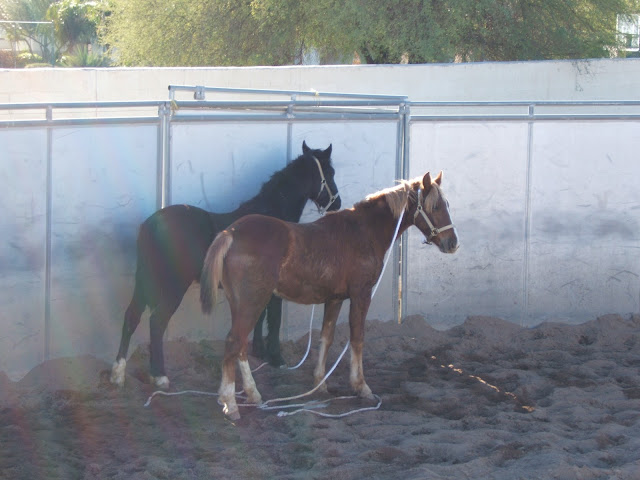 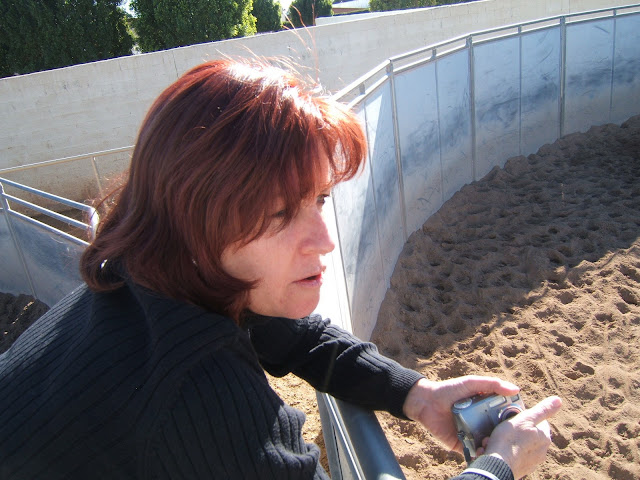