During this time, Christinna was doing research about mustangs and training and learned of an Extreme Mustang Makeover that was being held in Fort Worth, Texas.  We made plans to attend.   On the flight there, we worked on all the corporation documents required by the Corporations Commission of Arizona and the IRS in order for the ministry to be tax exempt.  We came up with our Mission Statement:
“Through Christ Jesus, Rein of Faith Ministries, in its commitment to God’s children, seek to develop a ministry with the stewardship of horses and the guidance of the Holy Spirit enabling the ministry to combat community deterioration and juvenile delinquency by exposing the community to the power of horses whereby mutual respect grows between horse and human creating a positive diversion in the direction and path of the individual in his/her future; a trail full of new responsibility, submission and self-control with a commitment to an amazingly strong but sensitive animal that God created for us to love and respect.”
The Extreme Mustang Makeover event was wonderful for us to attend.  We had new hope for the mustangs.  When we returned home, we immediately went and bought composite saddles, saddle pads, bits and bridles!!!   We were encouraged!!  It was time to mount up.   Saddling Dude was much easier than saddling Zeke.   We were probably about 3 months further along with Dude since we had that head start with him.  It wasn’t long after we bought the saddles that we were able to get up on Dude with someone leading him.  I think we held our breath while we were up there.  We were very gentle and cautious.  One time, however, we decided to lunge him with Christinna with the lunge line and me up on him.  Well, I think he was surprised that “something” was on his back when I said something, because he started running around the lunge line so fast that the saddle started to slide and I had to bale.
That was my first fall off a horse in a very long time!!!   We then started to work with putting a bit in.   While working with Leslie I was also watching training DVD’s by Kitty Lauman.   She was one of the winners at the Extreme Mustang Makeover.  I thought I could learn a lot from just watching her DVDs.
Picture of Dude’s 1st ride: 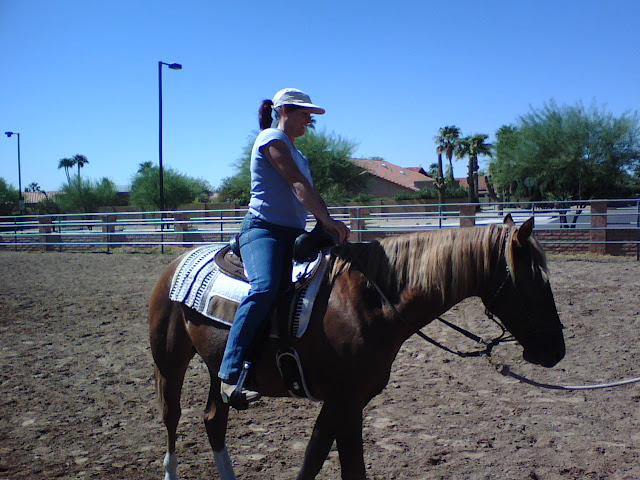